The North East Theatre Organ Association was formed on the 26th October 1968, when theatre organ enthusiasts Eric Lee, James Alderson and Jack Temple called a meeting of North East members of the Theatre Organ Club to discuss the disappearance of theatre organs from the region’s cinemas* and it was agreed to aim to acquire and preserve a good example of a Wurlitzer organ for the north east region.

Eric contacted well-known Newcastle organist, Con Docherty (who had played for Gaumont British / Rank for many years) and he agreed to accept the title of ‘President’ of the Association, later becoming ‘Patron’ when Nigel Ogden took over as ‘President’.

Fantastic Response to the Wurlitzer Organ 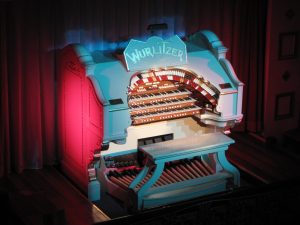 We were fortunate in acquiring a fine Wurlitzer organ very quickly (see History page) and started running regular concerts around the region using the Hammond organs in local clubs, etc., to provide entertainment, recruit new members and to raise funds for the eventual installation of the Wurlitzer. We have always been amazed at the enthusiasm and generosity of the team of professional organists from around the region who have played without requesting any fees (from 1968 up to the present day) to help support the Association’s cause – without them the project could never have happened!

Whilst the membership base was being built up and funds raised, the search for a new home for the Wurlitzer began and, almost five years later, work began to install the Wurlitzer in the United Social Club, West Cornforth, County Durham. The opening concert took place in 1974. 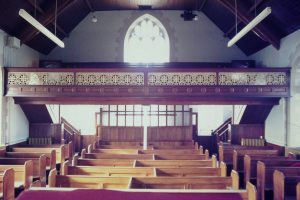 Sadly the organ’s residence at West Cornforth was short (it was removed in 1976) and eventually the Wurlitzer found another home in the former Trinity Methodist Church at Howden le Wear when, in March 1977, the N.E.T.O.A. became the first voluntary group in Europe to acquire their own premises for the preservation of a theatre pipe organ.

Fundraising concerts continued around the north east and a series of hugely successful annual garden parties were held in Tom Musgrave’s garden at Hunwick, all of which, together with the support and practical assistance of the team of volunteers, helped to turn the plans for the project into a reality. Since opening in 1986 of the newly re-named ‘New Victoria Centre’ and its Wurlitzer, there have been ongoing developments and improvements and a wide variety of regular events continue to be held for the benefit of our own members and that of the community. The year 2016 marked the 30th anniversary of the opening of the New Victoria Centre and the Wurlitzer and our Anniversary Year saw several special events with two anniversary concerts in March, the presentation of the ‘Queen’s Award for Voluntary Service’ in August, acceptance as a Registered Charity in October and the publication of the sheet music for our very own march “New Victoria“, composed by Joe Marsh and released in November by the prestigious London music publishers Stainer & Bell Limited. 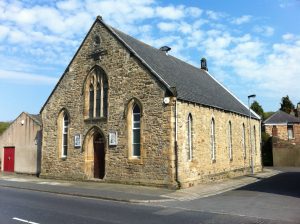 * There had never been very many theatre organs in the region and the largest of these, the 3 manual 19 rank Wurlitzer ‘Balaban 4’ model in the Odeon (originally the ‘Paramount’) theatre in Newcastle upon Tyne, had been removed several years earlier. By 1968 only the Compton organs in the former Black’s Regal theatres (by now operating as Odeons) in Sunderland and Gateshead remained playable – the Christie in the Classic (originally Regal) in Durham was still in situ, but the console had been boxed in and the organ was not usable. 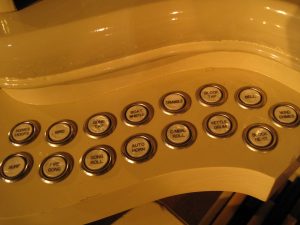 The Trustees of the N.E.T.O.A. would like to reiterate their thanks to the members and friends who have given freely of their time and expertise over the years to raise funds; acquire, install and maintain the organ; buy, adapt and maintain the New Victoria Centre and carry out all of the tasks (most of which are unseen) involved in running the Association and our regular concerts and events.

We believe that this is the first such award given to a theatre organ preservation group and as such it is a particular honour to receive it.

Special Thanks and Memories of our late ‘Patron’: Eric Lee Esq.:

Eric developed an interest in the theatre organ through listening to the ‘wireless’ and when one of his favourite organists, Reginald Foort FRCO, came to play at a Methodist Church in Crook in 1940, Eric (aged 11) was in his element; afterwards he met the great man and they continued to correspond long after ‘RF’ moved to the USA. Eric was one of the three founder members of the NETOA and it is due to a legacy kindly left in his will that we have been able to re-build and update our website.

Change of Status to a ‘Charitable Incorporated Organisation:

The North East Theatre Organ Association was registered as a ‘Charitable Incorporated Organisation’ by the Charity Commission on 4th October, 2016:

The full N.E.T.O.A. story is in our special Souvenir Brochure (available from our Sales Page): 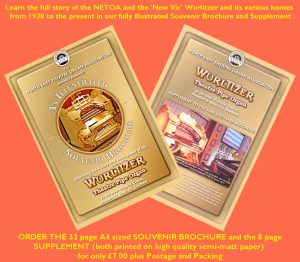