What is a Wurlitzer Theatre Pipe Organ? 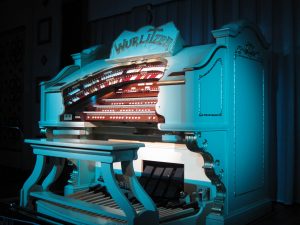 The principal use of the pipe organ up until the late 19th Century was in connection with religious services.  The musical limitations of the organ were defined by the ability to provide enough air under pressure (or ‘Wind’) to blow the instrument and the mechanical capability to control large numbers of pipes whilst maintaining a lightness of touch which would allow the organist to play with speed and dexterity.

New developments in the mechanical control of the organ, pipe voicing and organ blowing, which came into existence during the second half of the 19th Century, brought about a revolution in the variety of sound, power and musical capabilities of the instrument: hence also the uses to which it could be put.

Many Victorian Town Halls and Concert Halls were equipped with very large organs and the players of the day transcribed well-known orchestral pieces for the organ, leading to a resurgence of interest in the instrument for use away from the traditional religious surroundings.

The Influence of Robert Hope-Jones in the Technical Development of the Pipe Organ: 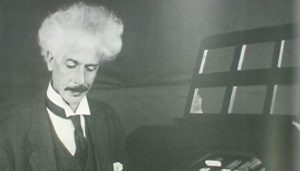 Robert Hope-Jones was an electrical engineer who worked for the Lancashire and Cheshire Telephone Company. He Patented many mechanisms in connection with the operation of telephone systems. He was also a talented amateur musician, having played the organ from an early age and was organist and choirmaster of St. John’s Church in Birkenhead at the age of 17, where he went on to apply his engineering skills to developing a series of revolutionary amendments to the organ.

Although he cannot be credited with inventing the idea of electrically controlled organ action, Hope-Jones made the first truly safe and reliable system.  He adopted low voltage solenoids with a low-mass soft-iron armature and produced a system capable of rapid repetition which could not be out-played by any organist and his basic design remains the basis of all electro-pneumatic organ actions to this day.

Mechanical Improvements to the Pipe Organ

Hope-Jones devised numerous mechanical changes to make the instrument easier to play and improve the operation and sound of the organ, including:

In 1889, at the age of 38, Hope-Jones resigned from the Telephone Company and formed his own organ building company, which built organs for many churches across Britain (one of biggest being Worcester Cathedral). Unfortunately, he ran into difficulties and moved to the USA, initially working for the Austin Organ Co. and then for various other organ builders before establishing the Hope-Jones Organ Company in Elmira, New York in 1907.  Despite a good order book the Hope-Jones company had financial problems and ceased trading in 1909. 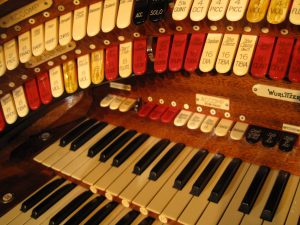 The Rudolph Wurlitzer Company & the Development of the Theatre Pipe Organ

Franz Rudolph Wurlitzer had built up his vast musical empire from humble beginnings: born in Saxony in 1831, he emigrated to America in 1853, having no money and little command of English and became the embodiment of the all-American dream of rags-to-riches.  His company based in Cincinnati benefited from the Civil War, supplying instruments to the Union Army and in 1880 they commenced manufacture of pianos and then other instruments including automatic and coin-operated instruments and around 1900 they entered a marketing arrangement with the North Tonawanda Barrel Organ Works in New York State to sell their band organs, eventually buying out the De Kleist Company who owned the works in 1909 and by now Wurlitzer also had large retail music stores in many major U.S. cities to sell their products plus other musical instruments, sheet music, pianola rolls, records, etc., etc.

Rudolph Wurlitzer’s youngest son, Farny Reginald, joined the firm in 1904, soon becoming manager of the North Tonawanda plant. It was he who recognised the potential market in making instruments for the accompaniment of silent films and the assets and patents of the Hope-Jones Organ Company were acquired by the Rudolph Wurlitzer Company, who saw a new market developing in the Movie Theatres which were starting to spring up around the Country.

Hope-Jones stayed on in an advisory capacity with for a while, eventually, however, he was banned from the Wurlitzer factory and, disillusioned, in 1914 he took his own life.

Movies produced at that time were ‘silent’ and it was quickly found that a suitable musical accompaniment added greatly to the ‘atmosphere’ and dramatic effect of the films. Most theatres had a lone pianist who provided the music, improvising an accompaniment which fitted the action on the screen. 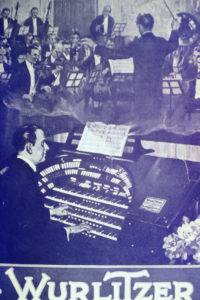 A huge advance was now offered in the form of the ‘Wurlitzer Hope-Jones Unit Orchestra’ (later known just as the ‘Wurlitzer Unit Organ’) – this could provide a fullness of sound similar to an orchestra, with a variety of instrumental sounds and effects, but under the control of just one musician, who could watch the screen and match the music to the action in the film, just as a pianist would.

Wurlitzer built their first ‘Unit Orchestra’ in 1911 and it was not long before other manufacturers started to copy the Wurlitzer organs – Moller, Robert-Morton, Kimball and others in the USA jumped on the band-wagon, but it was not until December 1924 that the first Wurlitzer organ was insatalled in Britain at the Picture House, Walsall and only a handful of others arrived during the silent picture era.  British organ builders also joined the business: the John Compton Organ Company, Hill & Sons & Norman & Beard Ltd. (who sold theatre organs under the ‘Christie’ brand name, after their Chairman – John Christie, of Glyndebourne fame) and Conacher and Co. were the main firms producing theatre organs in the UK.  Strangely, theatre organs reached their peak of popularity in the UK after the arrival of sound films, due in no small part to their popularity on the radio in the years immediately before and during World War 2.

2,238 Wurlitzer organs were produced over a 32 year period (mostly theatre style, although a few church models were also made). Production peaked in 1926, when the factory turned out a completed organ for every working day of the year! 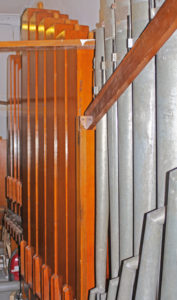 October 1927 saw the introduction of sound to American cinemas and the market for theatre organs in the U.S.A. dried up overnight. Fortunately, the European market for the theatre organ was just picking up and British installations made up a large proportion of organ production from 1930 to the end of production in 1943.  Wurlitzer established a small factory in Kentish Town, London, where some consoles and other components of the organs were made from the early 1930’s onwards, to save on shipping costs and import duty.

The “Mighty” Wurlitzer still has the ‘X Factor’

Although the number of theatre organs made by other manufacturers far exceeded that made by Wurlitzer, it must be more than mere coincidence that the ‘Mighty’ Wurlitzer, even today, has a special place in the hearts and minds of generations of movie-goers, radio listeners and dancers on both sides of the Atlantic.  Mr. Hope-Jones and Mr. Wurlitzer must have got something right!